The Truth About the IRS Scandals - Encounter Books
Back to Browse

The Truth About the IRS Scandals The Truth About the IRS Scandals
By Charles C. Johnson

The IRS scandal is far more complicated than it appears—and more pernicious. Its roots go back to its founding but modern technology has accelerated the harm that a few malicious IRS administrators can do to their political enemies.

Lois Lerner, the woman at the center of the congressional probe into the targeting of conservative groups, called the Tea Party “very dangerous” and hoped it could be used to roll back a pro-free speech court case, Citizens United v. Federal Election Commission (2010). Lerner conspired with her old colleagues at the FEC to leak confidential tax information. She even acted to retroactively award tax exempt status to politically connected charities while targeting for destruction those committed to truth.

Leaking sensitive information about individuals and organizations is par for the course for committed ideologues in the Obama Administration who rely on an apparatus of far left think tanks and their allies in the press to spin narratives that keep the Washington elite in control. The far left’s friends in Congress and the IRS, meanwhile, are doing everything they can to make sure the truth is never brought to light by spinning about what really happened.

This Broadside will expose the tax collector conspiracy that kneecapped the Tea Party, one of the greatest citizen uprisings in American history, and educates citizens about what has been done so that they might prevent it from ever happening again. Knowledge, particularly of the arcane regulations of the tax code, is power; a lawless tax collector class can only be curtailed by an active citizenry.

The Truth About the IRS Scandals is necessary because only the truth will set Americans free. Charles C. Johnson is an investigative journalist and researcher. His work has appeared in such outlets as the Wall Street Journal, L.A. Times, City Journal, The New Criterion, Reason, Sun News, Fox News, The Daily Caller, and The Claremont Review of Books. 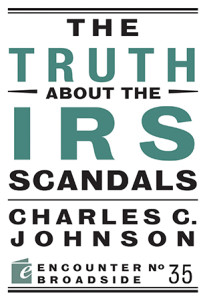