War on the American Republic Americans often use the words progressive, liberal, and radical more or less interchangeably without understanding their place in American history. Kevin Slack describes the distinct aims of the movements they represent and weighs their consequences for the American republic.

Each of the three movements rejected older republican principles of governance in favor of an administrative state, but there were substantial differences between Teddy Roosevelt’s Anglo-Protestant progressive social gospelers, who battled trusts and curbed immigration; Franklin Roosevelt’s and Lyndon Johnson’s secular liberals, who forged a government-business partnership and promoted a civil rights agenda; and the 1960s radicals, who protested corporate influence in the Great Society, liberal hypocrisy on race and gender, and the war in Vietnam. Each sought to overturn what came before.

Following the revolution of the 1960s, elites on both left and right turned against the industrial middle class to erect an oligarchy at home and advance globalization abroad. Each side claimed to serve the interests of disadvantaged or underrepresented groups. Radicals ensconced themselves in bureaucracy and academia to advance their vision of social justice for women and minorities, while neoliberal elites promoted monopoly finance, open borders, and the outsourcing of jobs to benefit consumers. The administrative state became a global American empire, but the neoliberals’ economic and military failures precipitated a crisis of legitimacy. In the “great awokening” that began under Barack Obama, neoliberal elites, including establishment conservatives, openly broke with the populist base of the Republican Party, embraced identity politics, and used COVID-19 and a myth of insurrection to strip away the rights of American citizens.

Today, an incompetent kleptocracy is draining the wealthiest and most powerful people in history, thus eroding the foundations of its own empire. KEVIN SLACK is a professor of politics at Hillsdale College, where he teaches political philosophy and American political thought, including American progressivism, liberalism, and radicalism.

Praise
“
“Kevin Slack’s War on the American Republic is outstanding. It blends strong moral seriousness with impressive scholarly analysis. Slack both explains and responds to the relentless attack on the manly, Christian republicanism of the older America by successive waves of liberalism, each one more radical than the last. This book is the best available panoptic view of the transformations in America’s moral-political orientation over the course of its history.”
—Thomas G. West
Professor at Hillsdale College, author of The Political Theory of the American Founding
Praise
“
“This is a thoughtful and interesting book, to be read by scholars and students alike, that corrects the record of generations of popularized and fake concepts describing how America got to its rotten state, where things may go from here, and how to correct our trajectory. This learned book should be read by people on both left and right.”
—Arthur Milikh
Executive director of the Claremont Institute’s Center for the American Way of Life
Praise
“
“Finally, a comprehensive treatment of the American left. A thoughtful, immensely well-researched, and spirited intellectual history of American decline.”
—David Azerrad
Assistant professor at Van Andel Graduate School of Government in Washington, D.C.
Praise
“
“This is a powerful book, exhaustive without being exhausting. Kevin Slack offers a bold new history of American society and politics, ranging from the founding all the way to our current despotic kleptocracy and beyond. If you want clarity about what lies ahead, understanding the past is essential, and there is no better place to start than this book.”
—Charles Haywood
Editor of The Worthy House

Americans look around at their country and no longer recognize what they see. The very category of citizenship is denied. Millions of illegal immigrants stream across an unprotected border and are escorted into the interior of the country, where they receive government welfare. Americans have learned that all their rights as citizens can be removed, not by elected representatives but by unelected bureaucrats claiming emergency powers. Under the authority of health, which used to mean human flourishing, Americans were told they must reduce their lives to bare preservation. They watched their demoralized neighbors become habituated to wearing face masks and line up for endless experimental vaccines. Journalists who disagreed were censored. The assistant secretary of health and the nation’s first female admiral, report state media, is a man who, declaring himself a woman, had his own penis removed. Little girls in California schools are told to question their genders and then, without the consent of their parents, are injected with irreversible, sterilizing puberty-blockers and courses of testosterone. Mainstream media outlets like USA Today run stories to destigmatize pedophilia. When polled, surprising numbers of Democrats approved of fines (55 percent), home confinement (59 percent), and prison (48 percent) for those who resisted or publicly challenged mandates for masks and COVID vaccinations. Twenty-nine percent approved of removing their children. Under the authority of anti-racism, Americans see their leaders promote vicious anti-white racial hatred, justifying a new Jim Crow for whites. For an entire year Americans watched Black Lives Matter and Antifa rioters burn great American cities, desecrate ancient churches, tear down historical monuments, break all laws, and injure law enforcement, only to be told that the riots were peaceful and the rioters had a right to destroy others’ property and livelihoods. The government creates record levels of inflation and disrupts supply chains, and Americans are told to embrace the new lower standard of living.

In sum, the ideas that most Americans had tolerated as absurd and relegated to academia—transgenderism, anti-white racism, censorship, cronyism—are now endorsed and carried out at the highest levels of political power. What formerly were the ideals of a radical Left are now the policies of an entire cosmopolitan class that includes much of the entrenched bureaucracy, the military, the media, and government-sponsored corporations. It seems there is little that can be done. While 70 percent of Democratic activists—those who lead the party—express shame of their own country, the sentiment extends to Republicans. Leading conservative intellectuals attack the country’s founding traditions and principles as a failure to the point of rejecting republican principles altogether. Among other conservatives, there is a general uncertainty as to what republican principles even are. As a professor of politics at Hillsdale College, perhaps the most politically conservative college in the country, I am often asked by my students and visiting friends of the college: “How did we get here?”; “What intellectual and cultural changes took place to bring us to this point?”; “What recourse do we have?” This book is my answer. It is written for them. While I am not a political insider, nor do I aspire to be a pundit, this book is also written in the spirit of the times. It is filled with both facts and controversy. It intends to be iconoclastic, especially for its conservative audience in a world where the old conservative gods are dead. Those gods, this book hopes to show, were newer in their construction, and they are experiencing a timely demise. And despite this book’s dour implications, I hope the reader will share in some of its optimism. History is for the living, and there is a rising generation of young conservatives who, in the face of the ruling class’s incompetence, corruption, and degeneracy, is finding much worthy to conserve for all Americans. 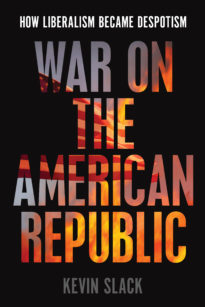