The Soul of Politics - Encounter Books
Back to Browse 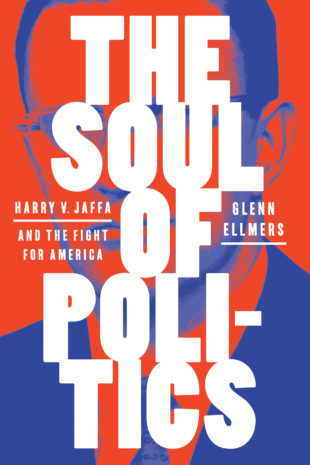 The Soul of Politics
Harry V. Jaffa and the Fight for America
By Glenn Ellmers

Jaffa authored Barry Goldwater’s famous 1964 Republican Convention speech, which declared, “Extremism in the defense of liberty is no vice. And moderation in the pursuit of justice is no virtue.” William F. Buckley, Jaffa’s close friend and a key figure in shaping the modern conservative movement, wrote, “If you think it is hard arguing with Harry Jaffa, try agreeing with him.” His widely acclaimed book Crisis of the House Divided: An Interpretation of the Issues in the Lincoln-Douglas Debates (1959) was the first scholarly work to treat Abraham Lincoln as a serious philosophical thinker.

As the earliest protégé of the controversial scholar Leo Strauss, Jaffa used his theoretical insights to argue that the United States is the “best regime” in principle. He saw the American Revolution and the Civil War as world-historical events that revealed the true nature of politics. Statesmanship, constitutional government, and the virtues of republican citizenship are keys to unlocking the most important truths of political philosophy.

Jaffa’s student, Glenn Ellmers, was given complete access to Jaffa’s private papers at Hillsdale College to produce the first comprehensive examination of his teacher’s vast body of work. In addition to Lincoln and the founding fathers, the book shares Jaffa’s profound insights into Aristotle, William Shakespeare, Winston Churchill, and more. Glenn Ellmers holds a PhD in politics from Claremont Graduate University, where he studied with Harry Jaffa. He is a visiting research fellow with Hillsdale College and a senior fellow with the Claremont Institute.

Praise
“
"Surprisingly, this is the first book-length treatment of Harry V. Jaffa’s life and thought. There will be others, but they will all build on The Soul of Politics, which is, next to Jaffa’s own works, now the gateway to the serious study of his thought."
—Charles R. Kesler
Editor, Claremont Review of Books, Dengler-Dykema Distinguished Professor of Government
Praise
“
"Just as Socrates was said to have brought philosophy down out the clouds to bear on the judgments of right and wrong we need to make every day, Harry Jaffa brought Leo Strauss down out of the clouds, for he managed to show how the vast tradition of political philosophy would bear on the gravest crisis of the American regime. Glenn Ellmers finally puts Jaffa himself in the story as a philosopher that Americans should study on into the next generations. And it comes at the time of another grave crisis in our regime."
—Hadley Arkes
Edward Ney Professor Emeritus of Jurisprudence, Amherst College
Praise
“
"It is, sadly, no longer possible to receive an education from the late Harry V. Jaffa, who trained dozens of fortunate students over a remarkable half-century career. But this book provides the next best thing. Ellmers’s account makes Jaffa’s wide-ranging oeuvre accessible to readers with little prior knowledge of his work. And read carefully, The Soul of Politics proves to be more than a mere scholarly commentary but is, like Jaffa's own work, a philosophic engagement with the ideas it confronts."
—Michael Anton
Lecturer in Politics, Hillsdale College, former National Security Council official
Praise
“
"Years from now, our children and our children's children will still be celebrating Harry Jaffa’s life work and the liberty that was so preciously purchased with the lives, the fortunes, and the sacred honor of the founders in 1776 at our nation’s birth. … Harry Jaffa reminds us of [the founders’] great achievements in the fight for freedom and enables us to pass on their great legacy to a new generation of Americans."
—Justice Clarence Thomas
Speech to the Claremont Institute, 1999

The bomb that detonated at Scripps College on the afternoon of February 26, 1969, didn’t injure anyone, but an innocent young woman was badly maimed when another device exploded almost simultaneously in Carnegie Hall at adjacent Pomona College. Hidden inside a shoebox wrapped in brown paper, the second bomb left twenty-year-old Mary Ann Keatley blind in one eye and ripped two fingers from her right hand. Keatley, married just five months earlier to an undergraduate at Claremont Men’s College, worked as the secretary for the Pomona political science department. These two explosions, and a third two weeks later, shattered windows and wrecked buildings. But they also rattled the confidence of those responsible for the academic mission and integrity of the Claremont Colleges. The student unrest and mayhem of the late 1960s affected many campuses besides Claremont, but what happened there is notable for other reasons, particularly the response of the academic and administrative authorities and a small minority of faculty who opposed them.

Resistance to the Vietnam War motivated the campus violence in California and elsewhere, but so did the demands of the Black Power Movement, especially at Claremont, where protestors called for various new programs in ethnic studies as well as quotas for minority students. A leading member of this group had asked, shortly before a fire that destroyed Claremont McKenna’s historic Story House (a separate incident, in addition to the bombings), “Do you want this campus burned down this summer or next summer?”

Among the small group of faculty opposing those demands was a professor of political philosophy named Harry V. Jaffa. Though diametrically opposite in outlook and temperament, Jaffa and the radical students agreed at one level with the slogan, “No Justice, No Peace.” Jaffa had studied with Leo Strauss, the brilliant Jewish émigré scholar who fled Nazi Germany in the 1930s. From Strauss, Jaffa learned that this apparently outrageous statement is in fact a true observation about human life: there can’t be peace without justice, nor vice versa. Jaffa’s philosophical reasoning and explanation for this observation were nearly polar opposite of the justifications invoked by the violent protesters. But he understood that the radicals, in their passionate commitment to building a new social order, perceived something essential about political life, a truth missed or suppressed by mainstream academic thought. The protestors had a conception of justice they were extreme in pursuing and saw no virtue in moderating their demands. This was a view Jaffa understood well.

Despite strong resistance and dire warnings from the small coterie of conservative professors, the administrators of the Claremont Colleges opened negotiations with the radicals on the assumption that those responsible for the bombings shared their faith in compromise and dialogue. The leadership of the colleges granted nearly every demand of the protestors in the vain hope that capitulation would appease those who threatened to burn down the campus. (It didn’t.) Not for the first or last time, the unwillingness of the academic establishment to defend the integrity of the university would remind Jaffa of the aphorism attributed to Winston Churchill: “You were given the choice between war and dishonor. You chose dishonor, and you will have war.”