Hidden in Plain Sight - Encounter Books
Back to Browse Hidden in Plain Sight
What Really Caused the World's Worst Financial Crisis and Why It Could Happen Again
By Peter J. Wallison

A competing narrative about what caused the financial crisis has received little attention. This view, which is accepted by almost all Republicans in Congress and most conservatives, contends that the crisis was caused by government housing policies. This book extensively documents this view. For example, it shows that in June 2008, before the crisis, 58 percent of all US mortgages were subprime or other low-quality mortgages. Of these, 76 percent were on the books of government agencies such as Fannie Mae and Freddie Mac. When these mortgages defaulted in 2007 and 2008, they drove down housing prices and weakened banks and other mortgage holders, causing the crisis.

After this book is published, no one will be able to claim that the financial crisis was caused by insufficient regulation, or defend Dodd-Frank, without coming to terms with the data this book contains. Praise
“
“I don’t remember any period in modern history when the analysis of historic economic events has been more dominated by the clear thinking of one person. That person’s name is Peter Wallison. He has dispelled more myths and provided more insights than all other scholars and commentators combined.”
—Phil Gramm
Former chairman of the Senate Banking Committee
Praise
“
“Those of us who have studied the financial crisis concluded years ago that Peter Wallison ‘wrote the book’ on the subject. Now he has actually done so. For years he warned of misguided federal housing policies, but his warnings were ignored. For the sake of our economy, this time Washington must listen.”
—Jeb Hensarling
Chairman of the House Financial Services Committee
Praise
“
“How much did the federal government contribute to the financial crisis? The question is quantitative, and the answer requires the kind of number crunching and careful thinking than cannot fit into an op-ed or television interview. Peter J. Wallison’s Hidden in Plain Sight is the book that answers the question most meticulously of any written since 2008.
—Prof. Casey Mulligan
The Wall Street Journal
Praise
“
“Hidden in Plain Sight has aroused furious opposition among liberal pundits like Joe Nocera, who, with scant analysis, denounced it in the New York Times as a ‘big lie.’ Some others are no less intemperate in their invective and stigmatization-by-association. Instead, serious analysts and policy makers should grapple with this book’s challenging, plausible, evidence-based case.”
—Prof. Peter H. Schuck
Barrons Magazine
Praise
“
“Academic economists generally agree that the mortgage meltdown during the recent financial crisis was in large part a consequence of government “affordable housing” policies. Peter Wallison’s Hidden in Plain Sight details the evidence in a totally convincing way.”
—Eugene F. Fama
2013 Nobel laureate in Economic Sciences

In their second 2008 presidential debate, almost three weeks after Lehman Broth­ers had filed for bankruptcy, John McCain and Barack Obama laid out sharply divergent views of the causes of the financial convulsion that was then dominating the public’s concerns.

The debate was in a town-hall format, and a member of the audience named Oliver Clark asked a question that was undoubtedly on the mind of every viewer that night:

Clark: Well, Senators, through this economic crisis, most of the people that I know have had a difficult time. . . . I was wondering what it is that’s going to actually help these people out?

Senator McCain: Well, thank you, Oliver, that’s an excellent question. . . . But you know, one of the real catalysts, really the match that lit this fire, was Fannie Mae and Freddie Mac . . . they’re the ones that, with the encouragement of Sen. Obama and his cronies and his friends in Washington, that went out and made all these risky loans, gave them to people who could never afford to pay back . . .

Then it was Obama’s turn.

Senator Obama: Let’s, first of all, understand that the big­gest problem in this whole process was the deregulation of the financial system. . . . Senator McCain, as recently as March, bragged about the fact that he is a deregulator. . . . A year ago, I went to Wall Street and said we’ve got to reregulate, and nothing happened. And Senator McCain dur-ing that period said that we should keep on deregulating because that’s how the free enterprise system works.

Although neither candidate answered the question that Oliver Clark had asked, their exchange, with remarkable economy, effec­tively framed the issues both in 2008 and today: was the financial crisis the result of government action, as John McCain contended, or of insufficient regulation, as Barack Obama claimed?

Since this debate, the stage has belonged to Obama and the Democrats and their narrative about the causes of the financial crisis was adopted by the media and embedded in the popular mind. Dozens of books, television documentaries, and films have told the easy story of greed on Wall Street or excessive and uncontrolled risk-taking by the private sector—the expected result of what the media has caricatured as “laissez-faire capitalism.” To the extent that government has been blamed for the crisis, it has been for failing to halt the abuses of the private sector.

The inevitable outcome of this perspective was the Dodd-Frank Wall Street Reform and Consumer Protection Act, by far the most costly and restrictive regulatory legislation since the New Deal. Its regulatory controls and the uncertainties they engendered helped produce the slowest post-recession U.S. recovery in modern history.

As long as the financial crisis is seen in this light—as the result of insufficient regulation of the private sector—there will be no end to the pressure from the left for further and more stringent regulation. Proposals to break up the largest banks, re­instate Glass-Steagall in its original form, and resume government support for subprime mortgage loans are circulating in Congress. These ideas are likely to find public support as long as the prevailing view of the financial crisis is that it was caused by the risk-taking and greed of the private sector.

For that reason, the question of what caused the financial crisis is still very relevant today. If the crisis were the result of government policies, as described in this book, the Dodd-Frank Act was an illegitimate response to the crisis and many of its unnecessary and damaging restrictions should be repealed. Similarly, proposals and regulations based on a false narrative about the causes of the finan­cial crisis should also be seen as misplaced and unfounded.

First impressions are never a sound basis for policy action, and haste in passing significant legislation can have painful consequences. During the Depression era, it was widely believed that the extreme level of unemployment was caused by excessive competition. This, it was thought, drove down prices and wages and forced companies out of business, caus­ing the loss of jobs. Accordingly, some of the most far-reaching and hastily adopted legislation—such as the National Industrial Re­covery Act and the Agricultural Adjustment Act (both ultimately declared unconstitutional)—was designed to protect competitors from price competition. Raising prices in the midst of a depression seems wildly misguided now, but it was a result of a mistaken view about what caused the high levels of unemployment that character­ized the era.

Hidden in Plain Sight is intended to be an entry in the political debate—a debate that was framed in the 2008 presidential contest but never actually joined. In these pages I argue that, but for the housing policies of the U.S. government during the Clinton and George W. Bush administrations, there would not have been a financial crisis in 2008. I do not absolve the private sector, but put the errors of the pri­vate sector in the context of the government policies that dominated the housing finance market for the fifteen years before the crisis and the government regulations that induced banks to load up on assets that ultimately proved to be toxic. The future of the housing finance system and the health of the wider economy depend on a public that is fully informed about the causes of the 2008 finan­cial crisis.

The Once and Future Worker

A Vision for the Renewal of Work in America

The American worker is in crisis. Wages have stagnated for more than a generation. Reliance on welfare programs has surged. Life expectancy is falling as substance abuse and obesity rates climb.

These woes are not the inevitable result of irresistible global and technological forces. They are the direct consequence of a decades-long economic consensus that prioritized increasing consumption—regardless of the costs to American workers, their families, and their communities. 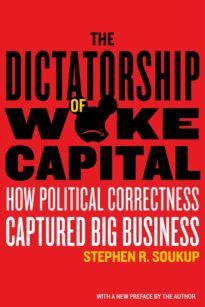 Over the last century, the Left has been waging a slow, methodical battle for control of the institutions of Western civilization. During most of that time, “business” remained the last redoubt for those who believed in free people, free markets, and private property. In the last two decades, however, that has changed, and the Left has taken its long march to the last remaining non-Leftist institution.