Men on Strike
Why Men Are Boycotting Marriage, Fatherhood, and the American Dream - and Why It Matters
By Helen Smith, PhD

American society has become anti-male. Men are sensing the backlash and are consciously and unconsciously going “on strike.” They are dropping out of college, leaving the workforce and avoiding marriage and fatherhood at alarming rates. The trend is so pronounced that a number of books have been written about this “man-child” phenomenon, concluding that men have taken a vacation from responsibility simply because they can. But why should men participate in a system that seems to be increasingly stacked against them?

As Men on Strike demonstrates, men aren’t dropping out because they are stuck in arrested development. They are instead acting rationally in response to the lack of incentives society offers them to be responsible fathers, husbands and providers. In addition, men are going on strike, either consciously or unconsciously, because they do not want to be injured by the myriad of laws, attitudes and hostility against them for the crime of happening to be male in the twenty-first century. Men are starting to fight back against the backlash. Men on Strike explains their battle cry. Helen Smith, PhD, is a psychologist specializing in forensic issues and men’s issues in Knoxville, Tennessee. She holds a PhD from the University of Tennessee and master’s degrees from The New School for Social Research and the City University of New York. 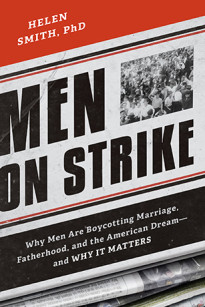