The Mideast Peace Process - Encounter Books
Back to Browse The Mideast Peace Process
An Autopsy
By Neal Kozodoy

Launched in 1993 after an agreement at Oslo, the Middle East “peace process” collapsed in bloodshed after seven fitful years marked by escalating Arab rejectionism and terror. Tracing the evolving history of that immensely costly experiment in political wishful thinking, the essays included in the first (2002) edition of this book offered, as one Israeli reviewer put it, a “timely” and “important” collection of “jeremiads, forewarnings of the perils to Israel should it ignore, or seek to fudge, the hard reality of its neighbors’ continuing malevolence.”

This new and expanded edition, drawn like the first from the pages of Commentary, takes note of a much larger “hard reality,” brought home to Americans by the mass-murder attacks of September 11, 2001, and since then to the West as a whole by the unrelenting jihadist campaign against democratic civilization.

While retaining many of the essays from the first edition, this new volume brings the story of the Mideast conflict up past the Israeli disengagement from Gaza in the summer of 2005. It is a story still steeped in blood—but also, thanks in large part to the determination of the Israeli people and the vigorous American response to Islamist terror, one that may at last contain the seeds of a more realistic and therefore more hopeful future.

Neal Kozodoy is Senior Director of the Tikvah Fund and editor of Mosaic and the book series Library of Jewish Ideas. 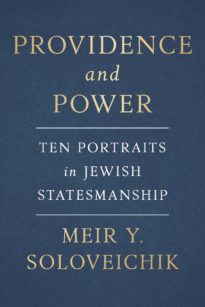 Ever since Plato’s Republic, the study of statecraft has been a staple of Western discourse, and so has the study of particular leaders. Although Jewish scholars, thinkers, and popularizers have contributed notably to this genre, strikingly few have turned their attention to the history of Jewish leaders—that is, leaders specifically of the Jewish people—in particular.

And yet there has been no lack of such outstanding figures, from the biblical period of Jewish sovereignty in the Holy Land and once again in present-day Israel or during the millennia of exile and formal Jewish statelessness in the Diaspora. This book, devoted to ten of the most colorful, fascinating, and consequential Jewish political leaders over the past three millennia, fills the gap.