DAVID CAST was educated at the universities of Oxford and Columbia, where he received a PhD in the History of Art in 1970.  He has taught at Yale, Cornell, and, for many years now, at Bryn Mawr College where he is Professor of History of Art and Eugenia Chase Guild Professor of the Humanities emeritus. His work is focused primarily on the critical language of art in the Italian Renaissance, English architectural theory in England in the seventeenth and eighteenth centuries and British realist painting in the twentieth century. His father was a friend of Forge for many years at the Slade School of Fine Arts in London. 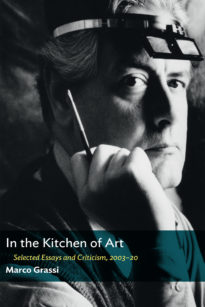 In the Kitchen of Art

Deeply learned, and with a style all his own, Marco Grassi is as at home with Duccio as he is with Norton Simon; Bronzino as with Bernard Berenson; a painting on his desk as with a Last Supper in Florence’s Basilica of Santa Croce. In the Kitchen of Art selects the art conservator and dealer’s most memorable contributions to The New Criterion over a span of nearly twenty years.